“Cut from a Different Cloth”
Textile Art :  A Retrospective by Lyn Dyson 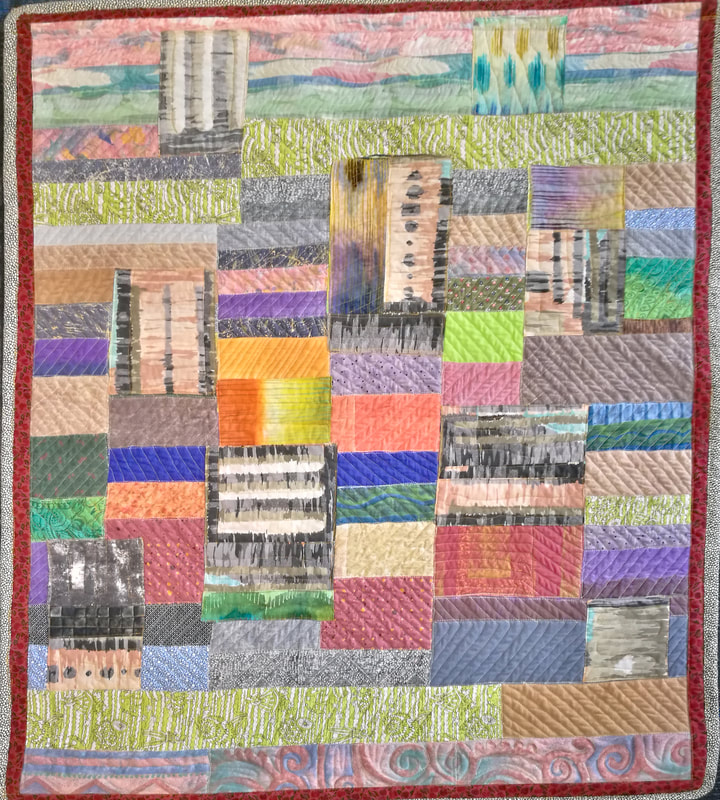 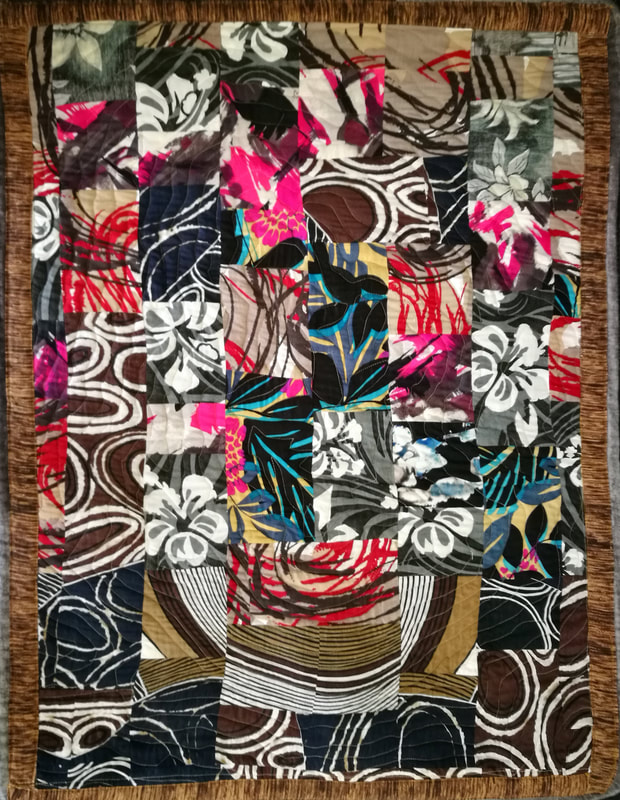 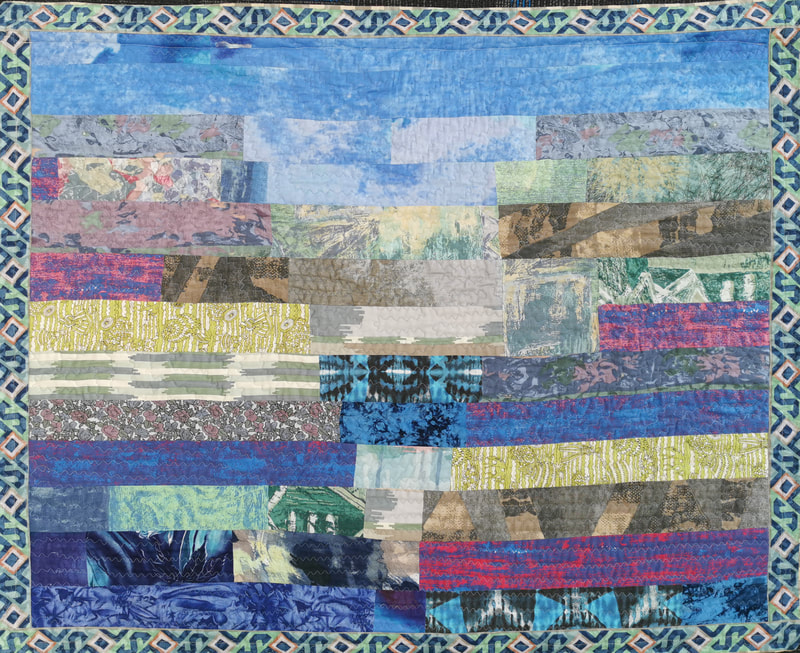 Lyn learnt oil painting as a teenager and continued being active as a painter. Later she spent 28 years in Austria  During this time she completed a diploma in acrylic painting and visited most of the major art Galleries in Europe. This cemented a knowledge of art eras, particularly impressionism and expressionism.

Lyn creates quilts using a method similar to collage. Small squares or oblongs are carefully pieced together to create forms and
movement in order that colour changes flow and the overall effect in her quilts is not static. 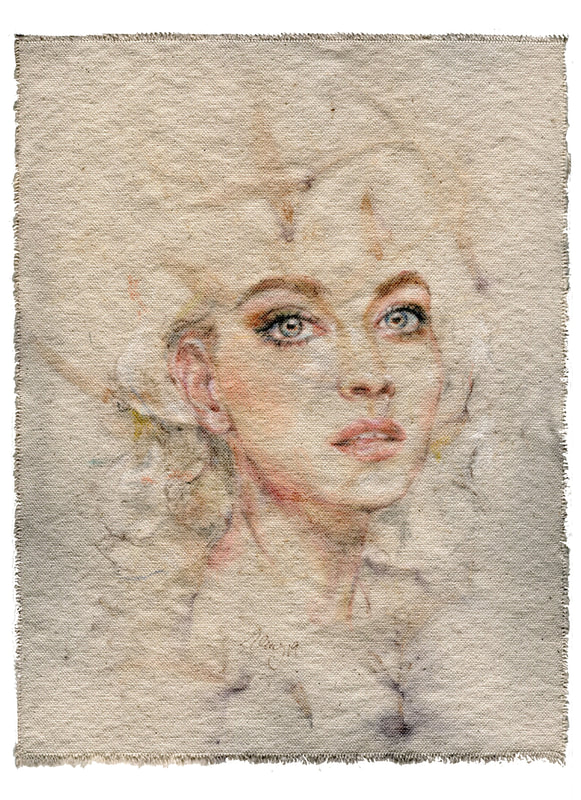 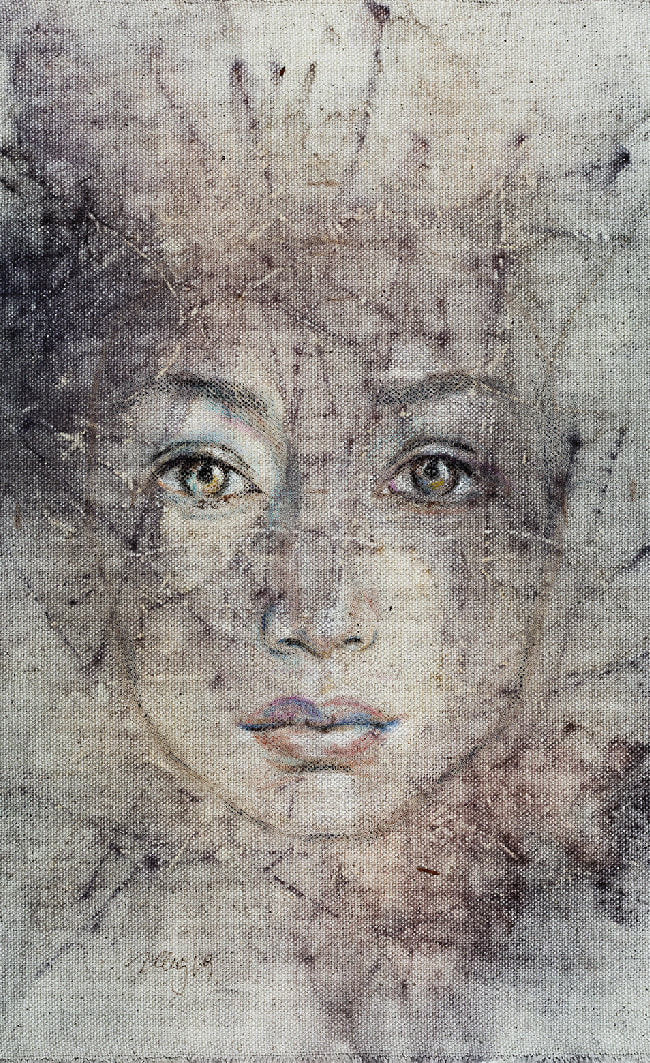 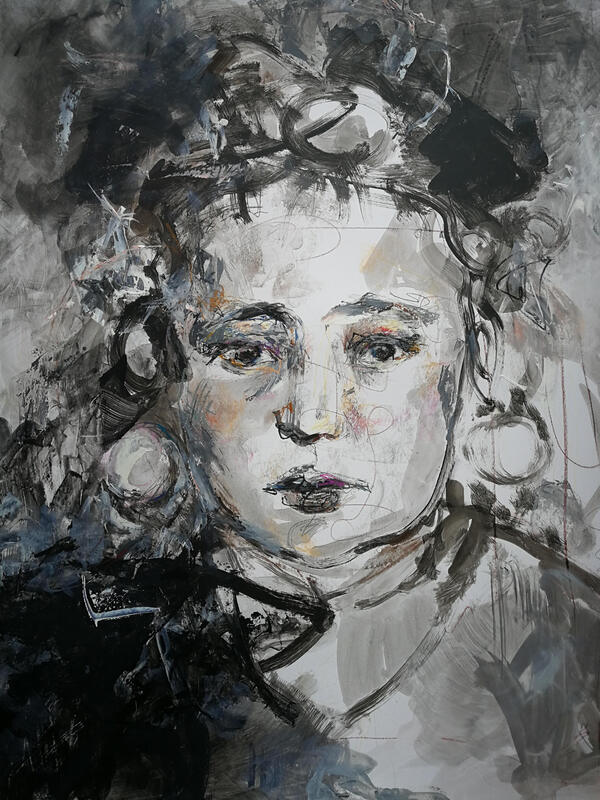 ​​Ulemj developed a fascination with people and the beauty of the natural world from a young age. She began capturing her impressions and producing hundreds of pencil drawings in kindergarten and primary school in her birthplace, Mongolia.

Her extensive travels, and time spent living in different regions of the world, enabled her to explore this fascination across cultures. During her 20’s, following her formal studies, Ulemj began working with watercolour pencils and then began exploring oils. During this period, her main concern was to refine her technique by striving for perfection through the creation of elaborate realistic paintings of people.

Her travels and fascination with people have led Ulemj to learn multiple languages and to develop an understanding and appreciation of various cultures and beliefs.  Ulemj arrived in New Zealand in 2006 and now lives and works in Tauranga with her young family.

In recent years, Ulemj has been exploring a range of mediums including ink, charcoal, watercolour, pastels - often using combinations of these, to portray the complexities of ‘the individual’. Her portrait paintings are observed impressions, often conveyed through messy lines and the use of mixed media.  Through her art, she captures the multi-layered essence of an individual and provides a glimpse of the soul.  Contrary to some cultural beliefs that human images can capture a soul, Ulemj believes her art helps to unleash it.

In the world today, falseness and separation can create barriers between people. Human diversity and individuality are given priority. Through studying the individual, Ulemj has realised that beneath the surface layers, we are all ONE. The true essence shared by all is singular.  Ulemj is drawn to that true connection, of belonging and sincerity. Her profound desire is to connect with individuals through her art and for viewers to experience a union with the underlying essence.

Our inseparable connection to mother nature is explored in Ulemj’s most recent artwork through the incorporation of natural elements and is influenced by Ulemj’s recent journey into the role of motherhood. 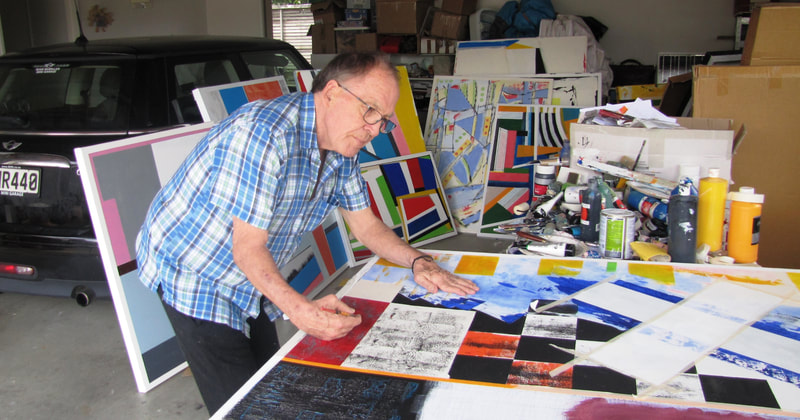 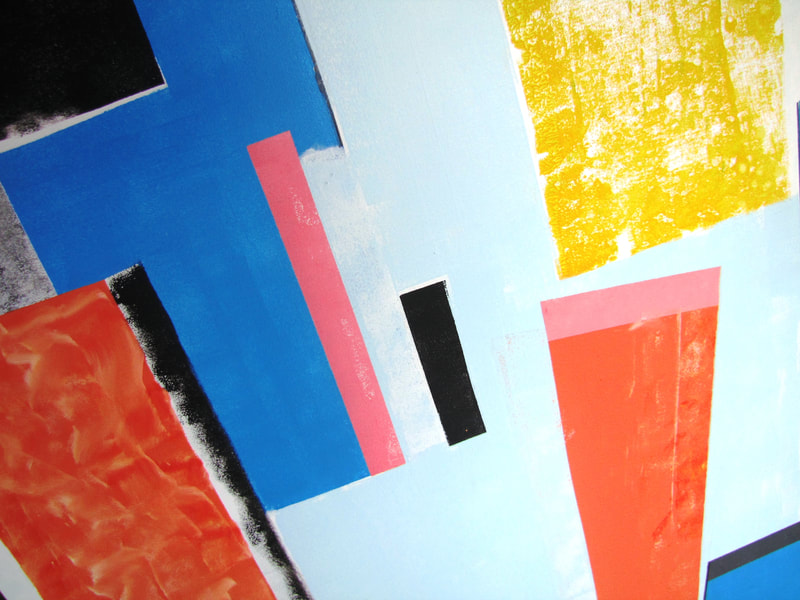 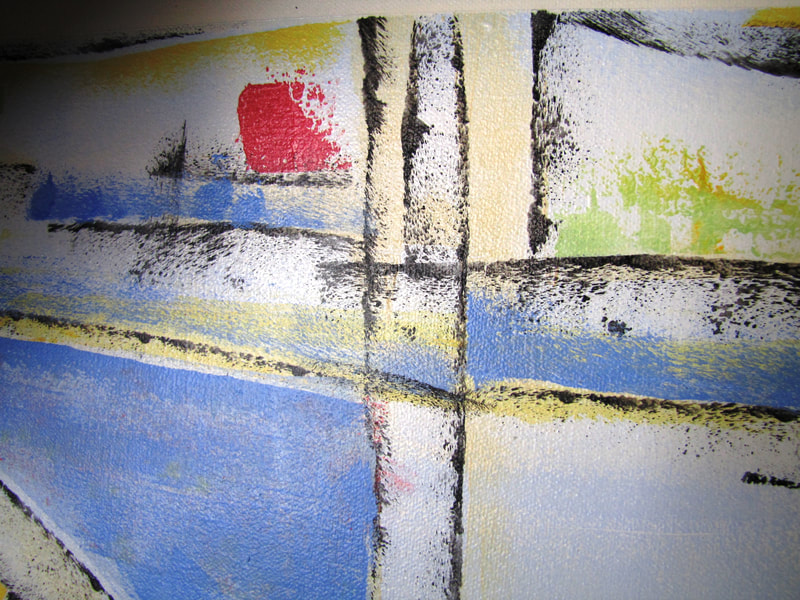 After his very successful inaugural solo exhibition  in early 2019 which resulted in excellent sales, Wilson Owen is back with more of his large  colourful abstracts. An early stage painter who got his start with lessons at Estuary Arts Centre less than four years ago, Wilson continues his exploration of  the abstract palette. Once again his passion for colour will be on show.
​
As the weather warms up I am busy preparing for the summer exhibitions at the Estuary Arts Centre.
My studio ( formerly known as The Garage ) is cluttered with new work and I am trying desperately NOT to splash paint on Mrs Owen';s Mini Cooper, which she insists has rights to half the garage. My exhibits this summer will include my second solo exhibition at Estuary Arts starting late January and running through February. This year 's sales of 60% at my solo exhibition were pretty much a record for an Estuary Arts solo show - so I would love to match that again.

"Feathers of Aotearoa" by Rebecca McLeod 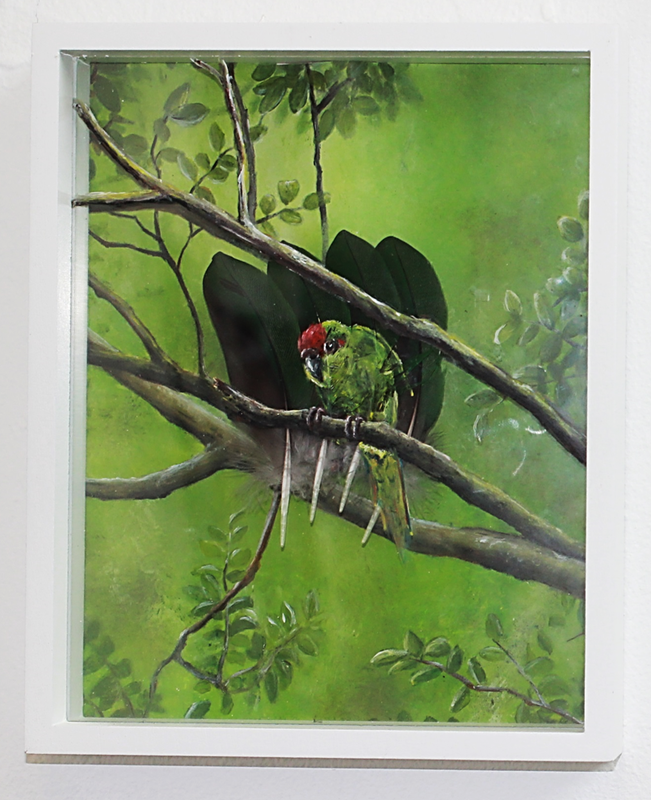 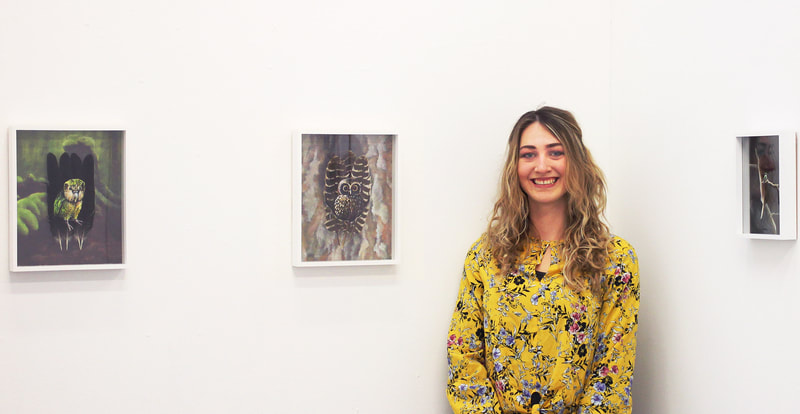 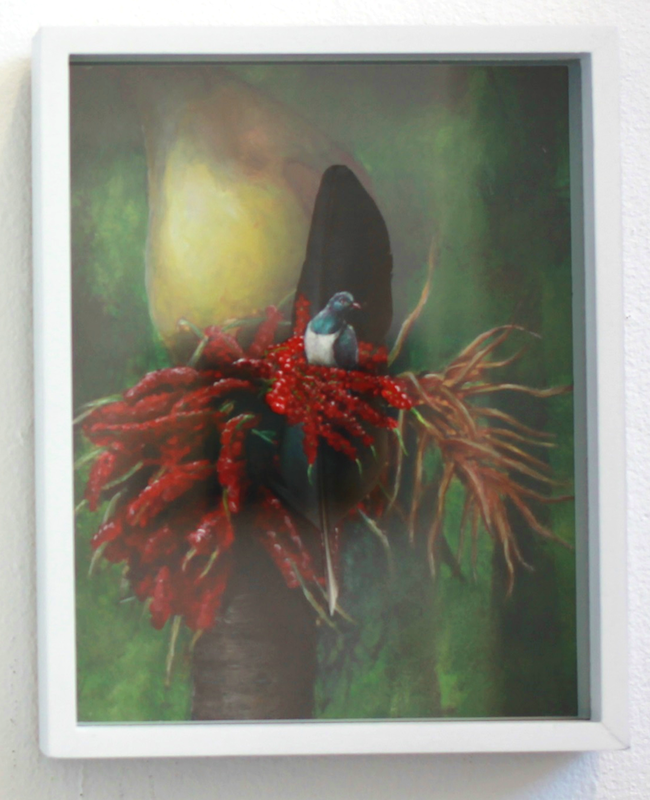 Gallery 5 (Upstairs)
30 January to 23 February 2020
​Opening Function Saturday 01 Feb 3pm to 5pm
​
Intricate New Zealand native birds painted on feathers creates a journey for the viewer to experience natural Aotearoa. This series shows New Zealand's unique bird-life in their natural habitats, playing with parallels to museum displays by preserving our bird-life behind glass. Our beautiful native birds wont last forever if we don't take care of them and their environment and these works are a way of showing how precious they are in a different and unique way.

Rebecca Mcleod, a recent Fine Arts graduate from the University of Canterbury is based in Christchurch, New Zealand. She grew up in Auckland next to a native bush where friendly Piwakawaka, Kereru and Tui were regulars around her home which, as well as her dad being a bird-photographer, is what inspired her love of painting New Zealand birds. She would often find herself studying their mannerisms and different personalities and tries to reflect their character in all of her works. Using nature and natural resources in her paintings has also been a key part in her works, but it wasn’t until 2017 when she examined a feather she found and wondered if she could paint on it that she took “using nature in her works” to a whole new level. All of the feathers and wood in her works are sourced completely naturally and she hopes that it can take viewers seeing the beauty of New Zealand’s unique birdlife to a whole new level.